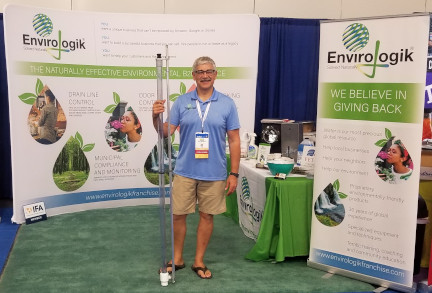 Where did it all start?

In February of 2019, I attended the annual convention of the International Franchise Association (IFA) in Las Vegas. I’m not a fan of Vegas at all, but this is one of the most important get-togethers for the franchise industry and I just can’t miss it.

A good friend found me at one of the after-hours social events, saying she had someone to introduce me to. Moments later, I was speaking with Aziz Tejpar, the owner of Environmental Biotech (EB), about his interest in launching a US franchise division Read more…..

Have you been struck by the entrepreneurial bug?

Over the past 20 years, I’ve worked with thousands and thousands of franchise candidates. Most of them were very nice people, ready to listen and open to learning about franchising in general and my Brand, in particular. Some of them were eminently qualified; had considered what they wanted in lifestyle and income, were educated on small business and even on franchising.  Read more…..

How important is franchise culture?

Whether you will be a first-time business owner or you’re a seasoned operator, building a successful new business should be a thrilling prospect, but it might also be a bit scary. While you will be building your OWN business, you certainly won’t be doing it alone. Not when you join a great franchise family, anyway. Read more…..

What makes a great franchisee-franchisor relationship ?

The roles of a franchisor are numerous, the responsibilities considerable, and the commitment to provide franchisees with the best possible resources for success is imperative.

Every great franchisor adheres to the basic philosophy that a franchise system’s success is dependent upon a mutually beneficial, profitable and trusting relationship between franchisor and franchisee.  Read more…..

What you can see at a Franchise Expo , and how COVID is changing them.

Two years ago I was in New York City for the massive International Franchise Expo, attending classes to renew my Certified Franchise Executive (CFE) certification. I also took the time to walk the show floor, and I saw almost four hundred exhibitors, including franchise concepts that were household names and many fresh new ideas. For example, many show attendees were introduced to poutine, an authentic Canadian comfort food of French fries, cheese curds and gravy, often with barbecued pork or other meat. Your cardiologist would probably hate it, but don’t knock it until you’ve tried it! Read more…..

Internal conflict: Sales vs. Operations, Administrative or other departments

Does your organization have internal conflict, veiled or obvious, between departments that are supposed to be working closely together? This might be your own small business, a large or small franchisor, or the huge global organization you work for. Some top executives even seem to encourage this behavior; perhaps they love watching the struggle or are hoping that whoever comes out on top will be the best future leader for the company? (Or does that just happen on TV?). Read more…..

How much do you really know about the Franchise industry? OK, many people say it’s not actually an industry, more a method of distribution of products & services, or a method of expansion of a brand. Whatever you call it….  Read more…..

After the COVID crisis, new opportunities!

We’re well into the global COVID crisis now, will you take a few simple steps to be happier, improve your performance and increase your opportunities?  Read more…..

Do you want to be a BIG FISH in a little pond, or a little fish in a BIG POND?

I am a firm believer in pursuing specialization and excellence, rather than trying to be all things to all people. Choose a niche with great opportunity, particularly if you have already had some successes in that area, and leverage recommendations and referrals from your satisfied customers. Read more…..